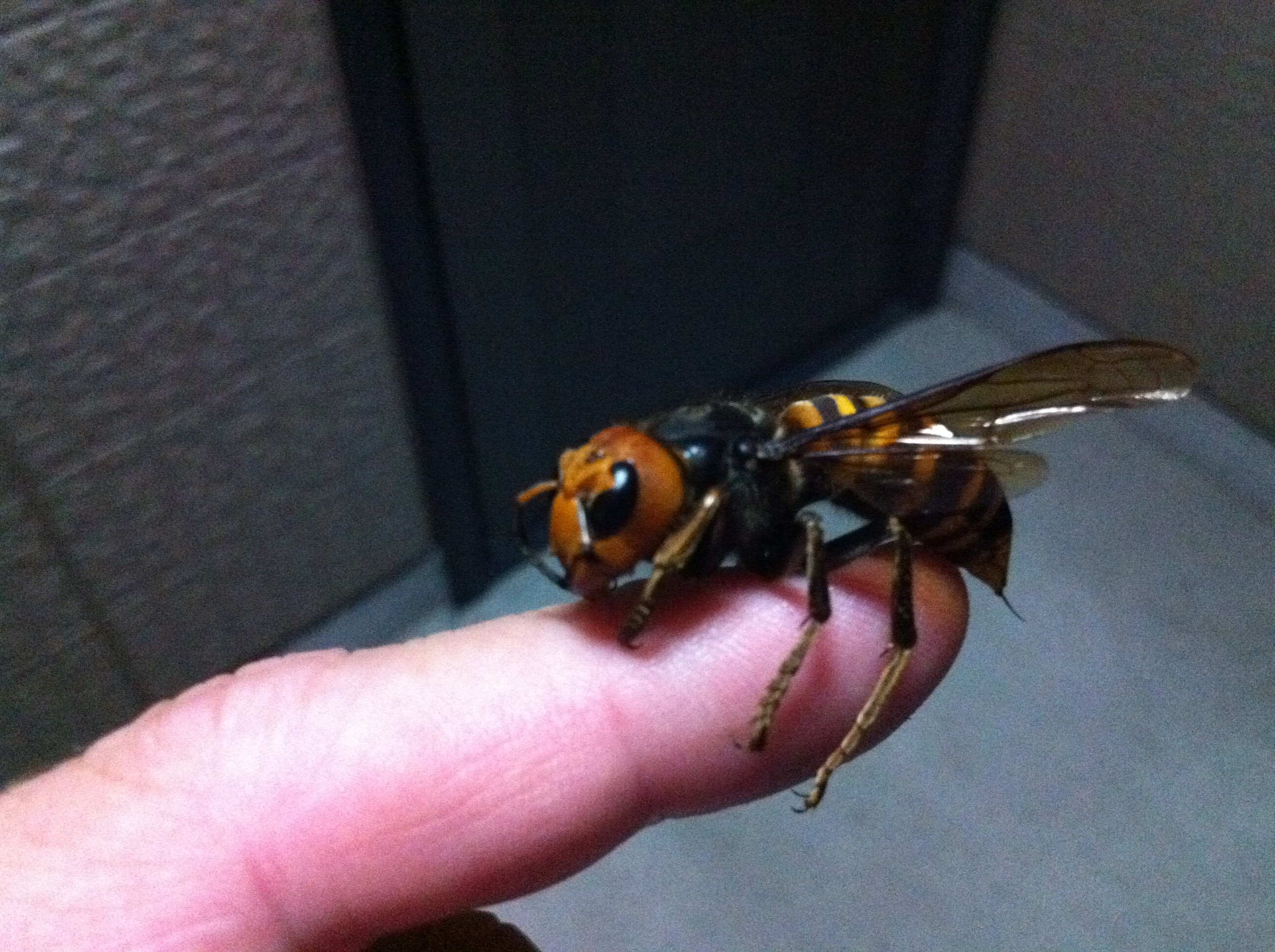 So my wife and I were sitting in the living room watching TV when we noticed a loud buzzing coming from another room. The kind of sound you hear when a bee is an inch from your ear. It was earth-shatteringly loud compared to the buzz of a honeybee. I curiously approached the room, thinking a cicada must have found his way in. As I got within eyeshot, I could see very clearly that this was no cicada. I've had my fair share of bee, wasp and even hornet stings, and don't have a particular fear of (nor desire for) being stung. But in seeing this thing on the ceiling, the heebie-jeebies started to set in. Luckily I have a veil which is incredibly efficient at keeping flying insects from dive-bombing my face. Unluckily it was literally directly below this questionable creature. I put on a hoodie (the thickest one I own) and mustered up enough courage to grab the veil...and then ran back out of the room, making sure to shut the door securely behind me. All of my other beekeeping supplies remained in the room with The Beast, so I had to find something which would reasonably convince me that the creature had been contained once I got it in there. The best I was able to find was a large glass candle holder and a piece of cardboard. With my protective clothing and my containment vessel in hand, the time had come.

I felt incredibly brave with my gear on, and it only took me about 20 seconds to capture it. Initially, I thought it must be a cicada killer wasp. Further inspection and comparison to some Google image search results debunked that theory, so we continued looking around. Eventually, we found some photos that exactly mirrored the captive. They were purportedly of the Vespa mandarinia (aka Asian Giant Hornet or Japanese Bee-killing Hornet). I thought there was no way I was holding a Japanese hornet, so I continued to search and came up with nothing but more reason to believe that I had indeed caught one of these creatures. What was it doing in America...or more importantly, what was it doing in my house? Turns out they eat honeybees! Well, to be fair, the adults actually don't eat the bees. They chomp their heads off and take the thorax back to their nest to feed to their larvae, then the adult consumes a liquid produced by the larvae (vespa amino acid mixture). Really quite interesting. 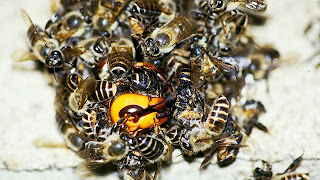 Apparently a handful of these hornets can take out an entire colony of European honeybees in just a few hours. The Japanese honeybee has adapted to the threat and came up with an efficient way of killing them off before they can do any significant damage. When the Vespa mandarinia finds a honeybee colony, it starts putting off pheromone markers which can attract others from up to 10 miles away (a distance which they can actually fly in just a few minutes!). Once the Japanese honeybees detect the pheromone, around 500 bees will fly out angrily and form a ball around the hornet. Then the honeybees cook the hornet to death...literally. They all "vibrate their flying muscles" in tandem to generate heat very quickly. Honeybees are able to withstand temperatures up to about 10 degrees higher than the hornet can, so the hornet dies before the honeybees. Unfortunately European honeybees haven't developed this defense yet, so their colonies are summarily destroyed.

I don't know how it got here, but I couldn't let it leave. I had to kill the creature to ensure it wouldn't go tell all its friends about my honeybee colony (or my people colony, for that matter). After reading more about Vespa mandarinia, I learned that they excrete phospholipase enzymes, which means their venom is literally capable of dissolving flesh. Their stingers are nearly 1/4 inch long, and the feeling of being stung has been described as "feeling like a hot nail being driven into my leg."

I'll keep my fingers crossed that this was a freak incident and somehow this was the only one around. If not...well...we'll cross that bridge when we come to it, won't we?
Posted by Chris Cashwell at 7:18 PM

The Keeper of the Bees

My wife and I live on a 6-acre farm in Olney, MD with two horses and an ever-changing number of chickens and bees. I also practice clinical herbal medicine, drawing from timeless wisdom developed over the course of thousands of years in Asia and North America. As a first-year bee keeper, I'm learning every day and documenting as much of that as I can carve out time for in my daily schedule. My hope is that I will inspire others to tend bees of their own, having the gained insight into the practice, purpose and many benefits of "backyard beekeeping".